Sometimes “simple” businesses can be the most attractive (and profitable) to own for the long haul. I put Toronto Stock Exchange-listed Toromont Industries Ltd. (TSE: TIH) under my ‘boring is beautiful’ banner along with insurance broking giant Marsh & McLennan Companies (NYSE: MMC).

Canada’s Toromont Industries Ltd. operates in the industrial and refrigeration industries primarily in Canada and the United States (with a small international presence). Toromont’s businesses are organized along two groups: the Equipment Group which includes the rental and sale of heavy equipment from such providers as Caterpillar and Massey Ferguson; and CIMCO Refrigeration, which is North America’s largest supplier of industrial and recreational compression equipment.

See below for my look at Toromont’s numbers: 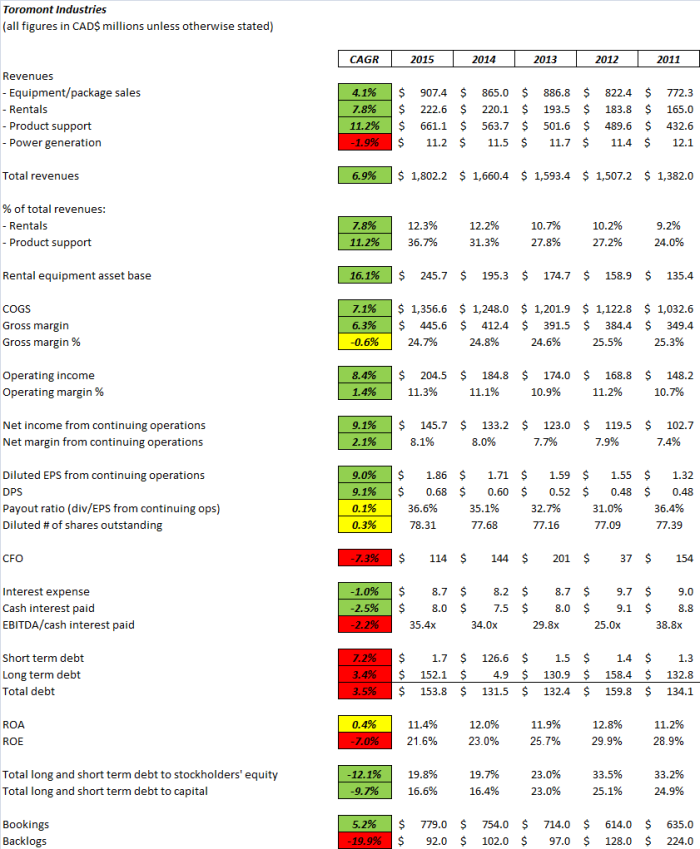 Unfortunately, there seems to be more RED than I would like:

(not overly concerned with Backlogs trend…I put more weight on Bookings, which was climbed by about 5% YoY).

However, the following quantitative figures lessen the RED impact for me:

Other favorable items of note include

Unfortunately, TIH is by no means cheap. The stock is currently trading at a PE of about 20 times and is already up nearly 26% for the year.

However, if you are a ‘true’ investor with a long-term horizon, I believe TIH represents an attractive investment.

What do you think of Toromont Industries Ltd.?