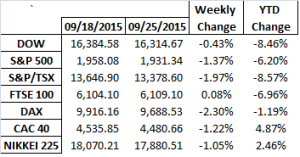 London’s FTSE 100 was the only index to escape last week’s market sell-off. The negative impact from the Volkswagen emissions scandal spread to other automobile (and component) manufacturers which led to the DAX assuming the dubious title of this week’s worst performer. Last week’s large sell-off in the DAX also meant it is now in negative territory on a YTD basis and this leaves France’s CAC 40 and Japan’s Nikkei 225 as the only indices in the black for the year thus far.